Hoof rot was unusually prevalent in elk on the State run Camp Creek-Horse Creek area South of the National Elk Refuge during the winter of 2013/14. Hoof rot has been seen in NE bighorns, and in large numbers of WA elk. Hoof rot has increased in WA elk since 2008.

The National Elk Refuge has been using Aminopyralid (Milestone) on the refuge since 2006. Aminopyralid came onto the market in 2005.  Aminopyralid, Clopyralid, and Picloram are all part of the same family of pesticides, and are chemically very similar. It is thought that hoof rot in WA elk is due to disruption of the hypothalamic-pituitary-gonadal (HPG) axis, or endocrine disruption. Picloram is listed on the EU list of potential endocrine disruptor, as a Category 1

“Category 1: Substances for which endocrine activity have been documented in at least one study of a living organism. These substances are given the highest priority for further studies. Contains 194 substances. This does not necessarily mean that there is final proof that the substance is an endocrine disruptor, but there is more or less comprehensive evidence of endocrine-disrupting effects in live animals. The substance should therefore be prioritized for further evaluation of endocrine disrupting properties.”

Clopyralid herbicides gets used in WA timber spraying under the trade name Transline.

Since the early 1990s through 2004 ~2000 acres of elk habitat have been treated with herbicides in the Jackson-Pinedale region. And have included the herbicide Spike(Tebuthiuron). Tebuthiuron is not only considered a high risk for water contamination, it is very persistent and stays in the soil for up to two years killing or damaging all plants it comes in contact with.

Elk on the refuge have exhibited antler deformities like elk in Washington as well and Hardware ranch Utah. 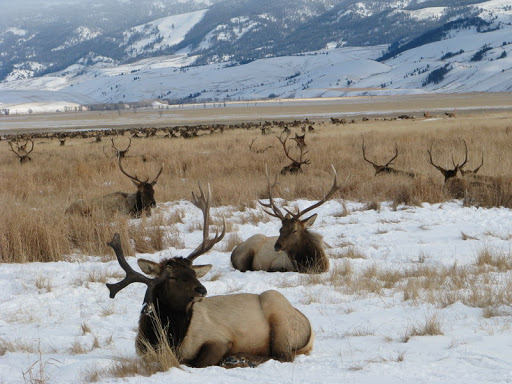