Agents of the Free

Home / Research / Agents of the Free

I began surveying highway 39 in Northern Utah for malformed wildlife beginning in April of 2014. This consisted mostly of looking at road killed mule deer, and visually observing live deer, elk, and moose for malformations. Some of the malformations that were found can be seen here.

These routine surveys led to surveys and observations of road side mineral licks, their locations, and their utilization. A portion of highway 39 is closed  from November to May where it crosses over the 9000′ crest of the Monte Cristo range. My observations and surveys had been limited to the lower portions of the highway, prior to the gate opening over the top of the mountain. Through April and May deer, elk and moose were observed feeding along the road side, and utilizing road side mineral licks. Deer utilized these licks during more hours of the day and night, and with more frequency than elk and moose. Elk utilized these licks with the least frequency, and seemed to focus on specific licks that were not utilized by deer and moose. Elk reduced their frequency of use from April to the mid part of June, where they are now rarely seen on these licks.  The elk below were coming into a lick in April.

Moose also reduced their use of licks like elk, but moose tended to use the same licks as deer. Deer are still utilizing these road side licks, with the same frequency. Highway 39 gets a lot of winter time traffic, up to the closed gate where there is a large parking lot for snowmobiles. Because of this use, the road gets a lot of sand and salt applied to it. This is probably the reason for the heavy utilization of wildlife, for the salt. Above the gate the road does not get as much sand and salt because of its closure. The road only sees limited sand and salt application during early winter. I would suspect that much of this is in the form of magnesium chloride sprayed directly on the road, just prior to storms. This is based on witnessing this, and the way that the road side licks look compared to the licks at lower elevations. These higher elevation licks tend to be further from the road, and located in fine grained clay soils. Deer utilizing these higher elevation licks seem to use them at the same frequency, but appear to be in better physical condition. Their coats are sleeker, and they are fuller bodied than deer at lower elevations, utilizing road side licks close to the road, below the winter closure gate. 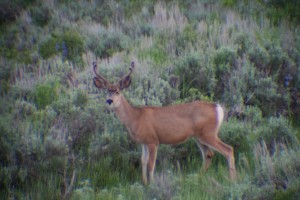 There are fewer malformations observed in deer utilizing these higher elevation mineral licks, but they may only be a piece of the puzzle. Further experiments to determine what minerals are being sought and utilized by these deer will conducted in the future.

It was during these routine surveys and observations that I came across something else. On 6-10-2014 I found a doe mule deer bedded in one of the low elevation road side salt licks. Physically she was was in poor shape, and she appeared disoriented. At first I assumed she had been hit by a car, but there were no outward physical signs of trauma. 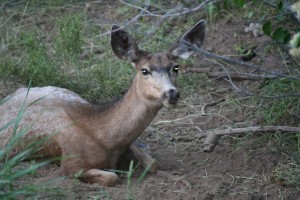 She had been browsing the road side vegetation very heavily, taking some of it down to the ground. When I first approached, she was chewing her cud. When she first stood up, her hind legs were stiff, and almost did not bend.

I just stood still, and employed some mule deer sign language, conjuring up my best Hutto impression, and after about 20 mins, she would tolerate me near her. Her udders were hanging, and swollen, and she had a fawn some where. After calming down, she continued to eat. As we moved up the hill side a yearling buck came into view and sounded the alarm, he tried twice to draw me away from the doe. She would get nervous and distance herself, but then after some coaxing I was let back to within less than four feet from her again. She would turn in circles as if her stiff rear legs were anchors. She was bright eyed and alert but obviously not doing well, she seemed very weak. I tagged a long for another 30 minutes up the hill side until it was dark.

I returned the next day, and took up the search for her. I found her on the other side of the road, again turning in circles, but still eating heavily. She would eat the vegetation down to nothing as she circled in placed. Along with the circling, she would bob her head up and down, in rhythmic fashion.

After she moved back up to the road, I was able to shoot video of the circling behavior.

After following her around and watching her feed, I noticed something that had escaped me the day before. The sides of the road had recently been sprayed with a herbicide. The leaves were just staring to wilt, so it had been sprayed very recently. It was affecting broad leaf plants, trees, and shrubs, but not grass…..looked like 2,4-D or Garlon. Organochlorine auxin mimic herbicides. Garlon replaced 2,4,5-T and is very similar chemically. If 2,4,5-T doesn’t sound familiar, that’s because it used to be known as agent orange, at least one half of it, 2,4-D was the other half. Not familiar with Agent Orange? Do an image search on the internet. I recommend REM’s Orange Crush for your listening pleasure while viewing. No need to send your conscience over seas this time.

You can see the maple leaves just starting to wilt in the first image I took of the sick doe. Maples seem to be some of the first to succumb. Click image to enlarge, the maples are the ones to the right side of the image.

I went back several times and followed the doe around. She moved further down the canyon, and up off of the road way. The longer she stayed away from the road, the better her condition. She turned fewer circles, and bob her head with less frequency. After watching and following her on and off for four days, I never did find or see her fawn. Her udders were dripping, so she had not been nursing in my absence. I last saw her just after dark on the 13th, heading into private property.

As I surveyed more of the road, it was obvious that around 20 miles of road way had been sprayed, and this was of course not the first time it had been done. Many roadside plants that were in differing degrees of “ripening” had been fed on by deer, and in one case what looked like moose. I say looked like because those were the only tracks present. The picture below shows twigs that have been eaten by deer. The following picture shows the affects of the herbicide on road side vegetation.

Below are images of sprayed trees that beavers are cutting down, and dragging across the road way into Beaver creek. Organochlorine herbicides are systemic, they travel through the entire plant. Because of this mulching sprayed trees has been banned, because it will later kill plants in beds where it is used. Not only are the beavers dragging in treated trees, the creek itself has been sprayed in several areas that have close proximity to the roadway. 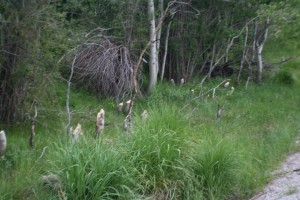 After looking further into this, I realized I had missed an even bigger swath of herbicide treated land. The power line right of ways that run through the area get dosed with even larger quantities of herbicide, specifically Garlon 4

These power line right of ways become highways for wildlife, they are usually not traveled by motorized vehicles, and allow for easy travel. And if it not for the salt bringing wildlife to the road side that gets sprayed with herbicide, the power lines arguably have the largest impact by way of sheer square miles that are sprayed. 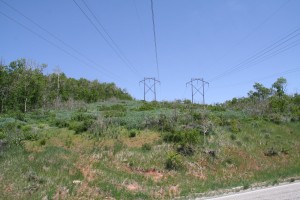 Organochlorine pesticides have been shown to be endocrine disruptors. They have been shown to be able to induce hypothyroidism and they have been shown to be associated with cryptorchidism. The two studies cited are but just a few. We have wildlife malformations and anomalies that are consistent with hypothyroidism, and we have testicular malformations, and varying degrees of cryptorchidism, in the presence of large quantities of organochlorine herbicides. Hypothyroidism and other endocrine disruption conditions create problems with mineral uptake, and balance. In the case of the thyroid the T4 hormone thyroxine is closely related to selenium and iodine function. Other minerals associated with thyroid function include, copper, zinc, magnesium, and cobalt(B12). Wildlife through out the West have been shown to be deficient in these minerals with selenium deficiencies being observed in moose, deer, and bighorn sheep. These particular deer are seeking out mineral licks, and several of them appear to be for magnesium chloride, a selenium protagonist.

Several people have looked for an environmental reason for these mineral deficiencies, and several have been found. But so far nothing accounts for the totality of Western mineral deficiencies in wildlife. It has been demonstrated that wildlife seek out many of these minerals when they are lacking them. Bighorn sheep in Wyoming have been shown to travel large large distances to mineral licks when suffering from white muscle disease. Mule deer have been shown to preferentially feed for selenium and copper in Utah. And declining herds of bighorn sheep across the West have set up residency along highways for the magnesium chloride that gets applied to the road. It has also been observed that supplementation of minerals, does not reverse declines, but does improve conditions. This shows that these deficiencies are real, but also points to an underlying condition, or problem that is driving these deficiencies. Endocrine disruption of the animal itself seems to explain those circumstances, especially when taken into account with other realities.

Below is a picture of herbicide sprayed plants on the Brigham face Wildlife Management Area in Northern Utah. 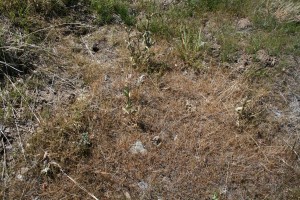 Below are Google Earth images showing power line right of ways that have been sprayed with Herbicides. This is in the Middle Fork Wildlife Management area of Northern Utah. The first image is from 2009, the second is from 2011.

Below is a Google Earth image showing the power line right of way, wildlife malformations, highway 39, and and the Middle Fork Wildlife Management area.

This is occurring across the entire West, with dire consequences for our wildlife.