Deer, elk, moose, and antelope have exhibited malformations along Utah’s highway 39 from Ogden through Rich County over the Monte Cristo crest. These malformations include underbites, Laminitis, Fibromas, and reproductive and antler malformation on males. These malformations and conditions are geographically clustered along this stretch of highway, which is sprayed with herbicides several times a year. Several pesticides are used including glyphosate(3) Utah’s moose have been in sharp decline for many years now, and It’s deer populations have been declining for 40 years, with a sharp decline 20 years ago. Many of these malformations and conditions are associated with endocrine and metabolism disruption, and in combination point to environmentally induced Diabetes as being a root cause of much of what is seen.

Along with the last 20 years of population declines there have been corresponding mineral deficiencies observed in animals across the Western United States. These have consisted mainly of copper and selenium deficiencies, but others have been observed as well. They have been seen in Bighorn sheep in WY, Elk in WA, as well as Antelope in Oregon. Deer in Utah have been documented to favor copper amended feed rations, while at the same time preferentially feeding on plants with much higher selenium concentrations than surrounding plants, this was in association with feeding near road sides(1). We see copper deficiencies in environmentally induced Diabetes in moose from Sweden, that also occur over the same time frame(2). Copper deficiencies are also closely associated with antler malformations and dysgenesis(4), while testicular malformations have been correlated to Diabetes(5). Diabetes and thyroid disorders have been known to be intertwined with each other for many decades(6). While copper deficiencies are closely related to disrupted metabolism disorders like Diabetes, Selenium has been implicated in thyroid disorders like postpartum thyroiditis, were selenium supplementation has been shown to help with the condition(7).

This combination of malformations and conditions has been observed across the Western United States across a similar time frame. Some of these malformations were being reported in the late 1960s succinctly with the beginning of unexplained falling deer populations that have continued to this day. There was a big spike in these cases in the early 1990s, along with sharp corresponding declines in deer and other wildlife populations. Other documented cases exist in Montana, Kodiak AK, Yellowstone, The National Bison range, Malheur National Wildlife refuge, Hotchkiss CO, Utah’s Paunsaugunt, The Ruby pipeline, Hardware ranch, and Washington. These cases tend to be geographically clustered with locationally distinct patterns, that follow a similar frame work of these included malformations with some malformations being observed in higher proportions than others. Some of the Hardware ranch elk have been observed feeding along the side of highway 39, where the Ruby pipeline intersects 39. 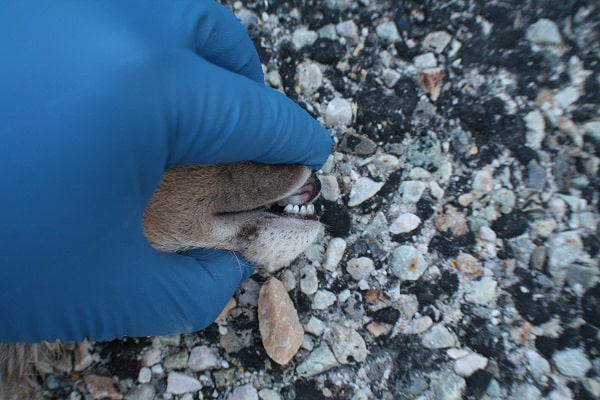 Below is a picture of a deer with malformed testicles. The left testicle has descended through the right inguinal ring causing the scrotum to be formed 90 degrees out from proper developmental alignment. Many of these malformations are stronger to the left or right just like the antler abnormalities seen in these and other populations. 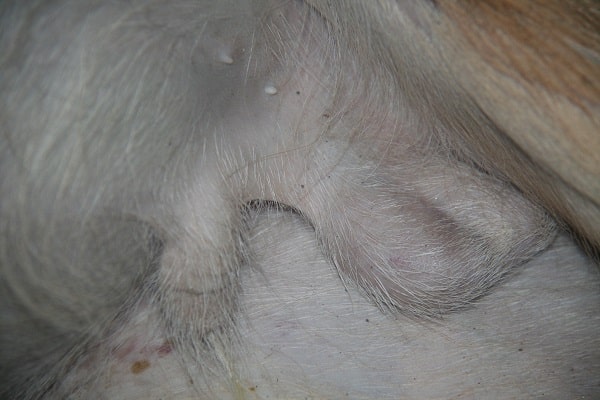 Below is a picture of  a deer from along Highway 39 with laminitis affected hooves. 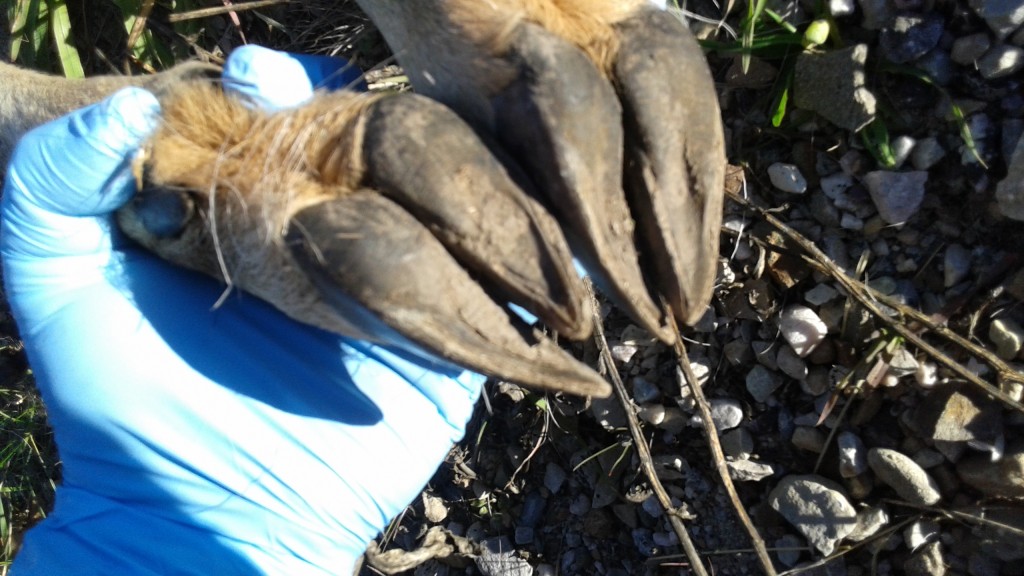 Picture of a highway 39 deer with a Fibroma 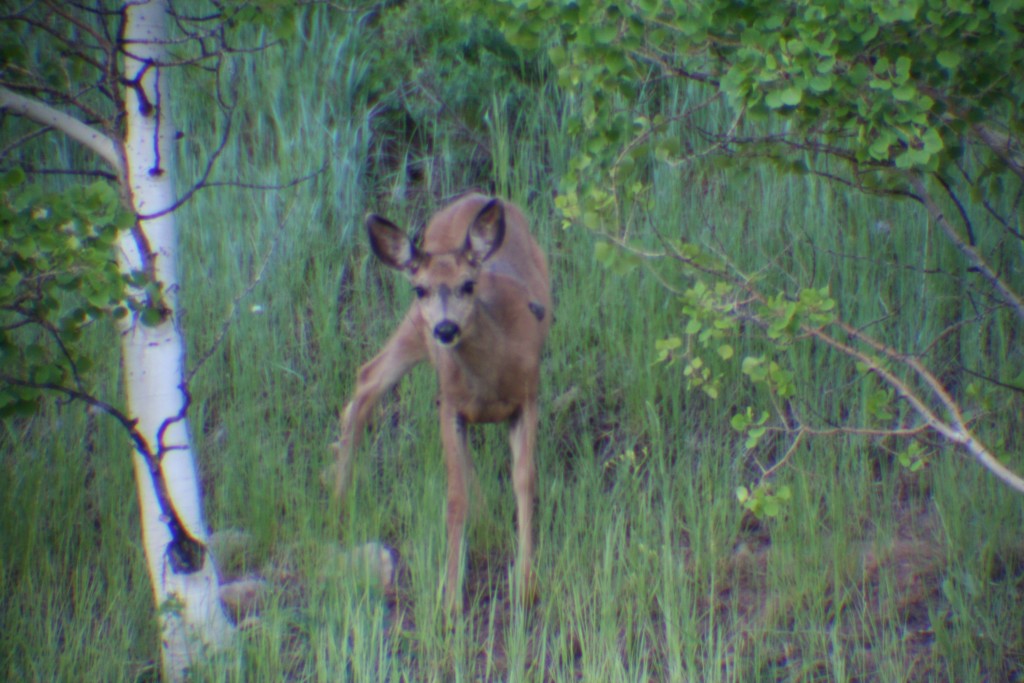 Below is a Highway 39 deer with malformed antlers, that is feeding on foliage that has been recently treated with herbicides. Many of these antler abnormalities are more prominent on one side of the deer than the other. This tends to be associated with weak or malformed antlers on the left side, like with the testicular malformations seen in these deer. 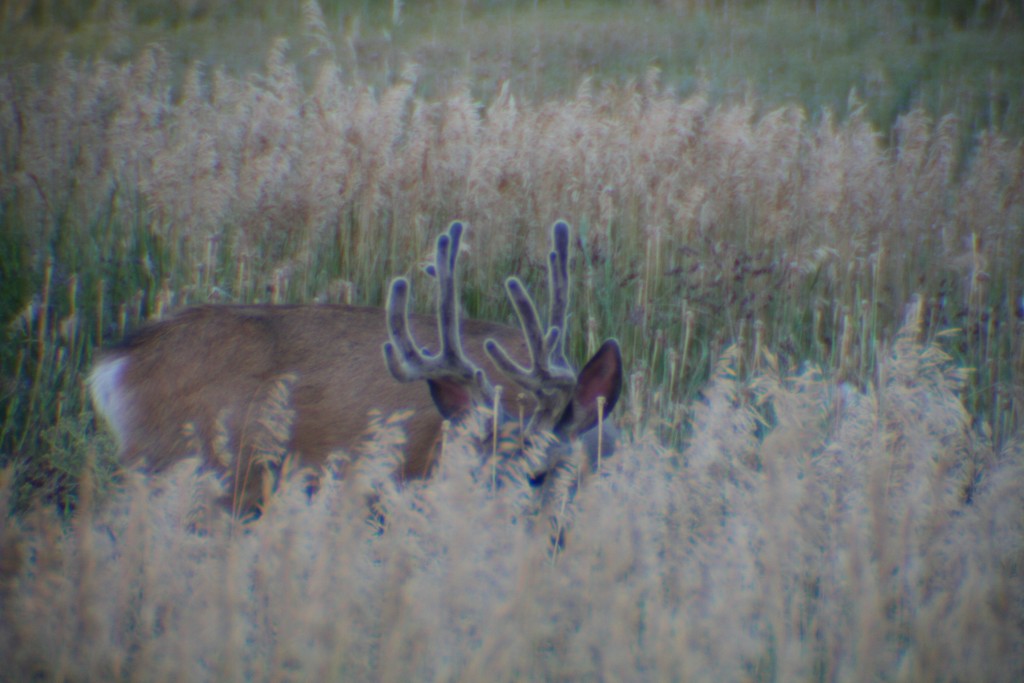 Below is the treated foliage this deer has just eaten. The foliage circled red has been clipped and eaten by the deer, and the black circled foliage shows the signs of having been recently treated with herbicides. 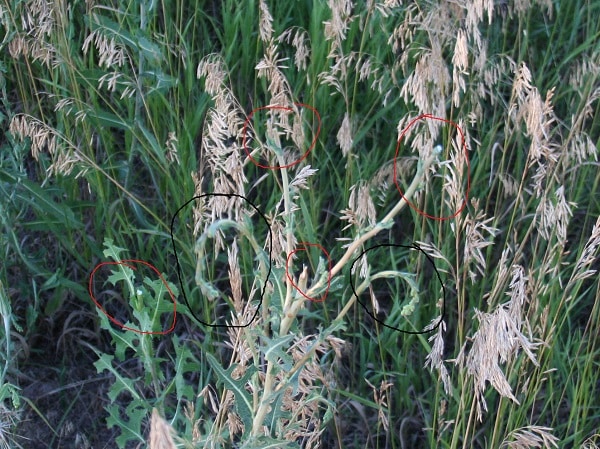 Many of the deer along this stretch of highway frequent road side licks from early spring until late into summer. This behavior has been seen on Utah’s highway 6, and in Thompson Falls MT, as well as other places across the West. Based on other instances of this road side “salt” lick behavior an experiment was devised to see what may be bringing these deer into these particular licks. Several forms of minerals were placed at two different licks to see if there was a preference for one particular mineral. Selenium amended salt, copper amended salt, plain magnesium chloride, salt and magnesium chloride, and plain salt were tested against each other. What ultimately had the highest draw was magnesium chloride mixed with the native soil, with mag chloride in salt coming in second.

The magnesium chloride ends up on the side of the road in the form of deicer that is sprayed or spread on the highway. The need for magnesium is not fully understood. One possibility is that these deer need the magnesium because they have disrupted thyroids, as evidenced by the presence of hypothyroidism. Thyroid disruption can create a higher demand for several micro nutrients like magnesium.  Magnesium works with thyroxine, a thyroid hormone also known as T4. What ever causes this draw for magnesium, it is highly correlated with the spraying of herbicides  on highways and other right of ways. This also serves as another means to keep these animals congregated along these roadsides.

Below is a deer with malformed antlers at a magnesium lick where the highway meets a pipeline right of way. The white pile between the two deer is pure magnesium chloride placed there to test what is drawing these animals into these road side licks. 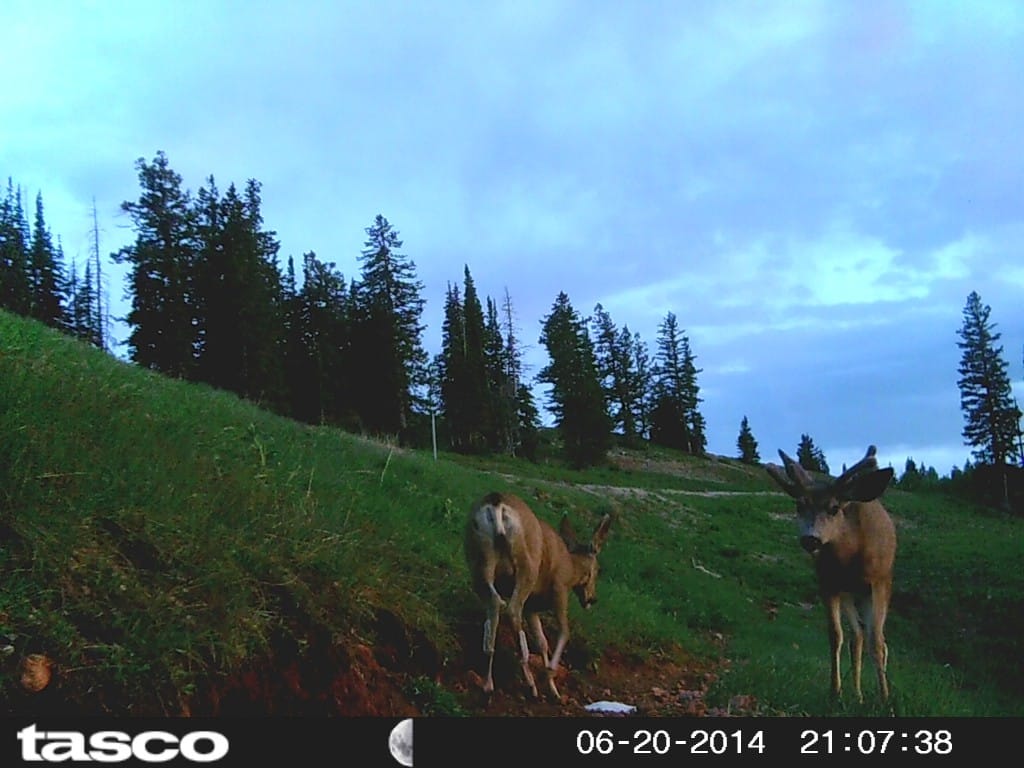 The sides of highway 39 are sprayed with at least two different pesticides, including glyphosate. Glyphosate is the most used herbicide in the world. Along with spraying there is a power line right of way that gets sprayed. The power line runs near and crosses the highway several times. There is also a gas pipe line right of way that is adjacent to one of the magnesium licks where it crosses 39. The right away has been treated with herbicides prior to and after its installation in 2011.

Deer and moose have been observed feeding on the herbicide treated foliage along the side of highway 39.

Below is an image of a moose on the side of Highway 39 that has just preferentially fed on a tree that has been recently treated, and shows signs of having been treated in the past as well. 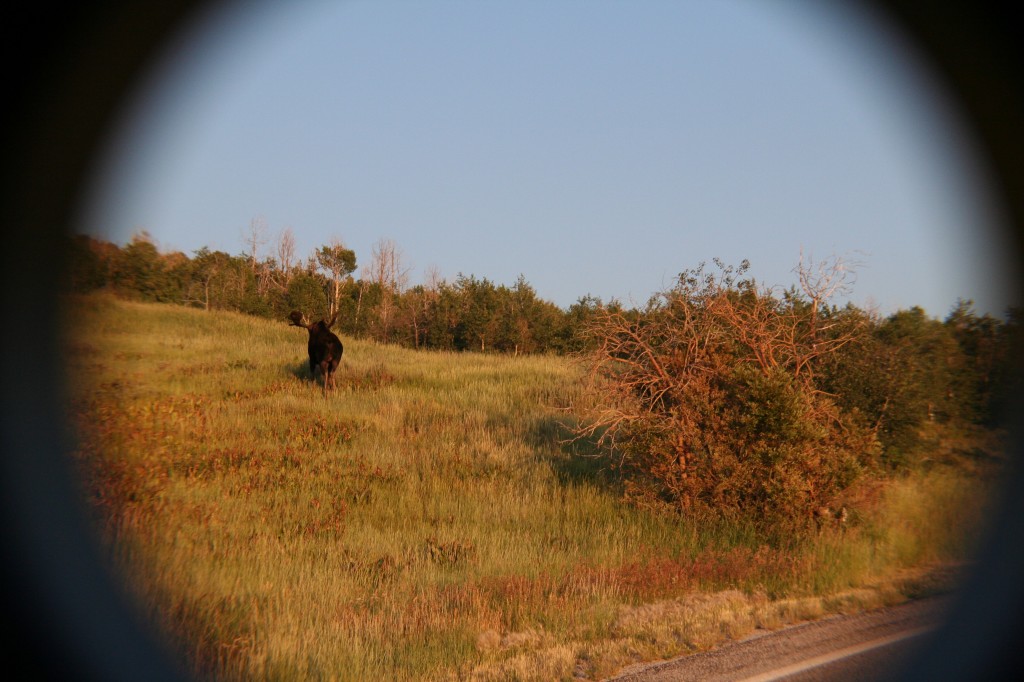 Here is a close up of what the leaves of that tree look like after being sprayed. 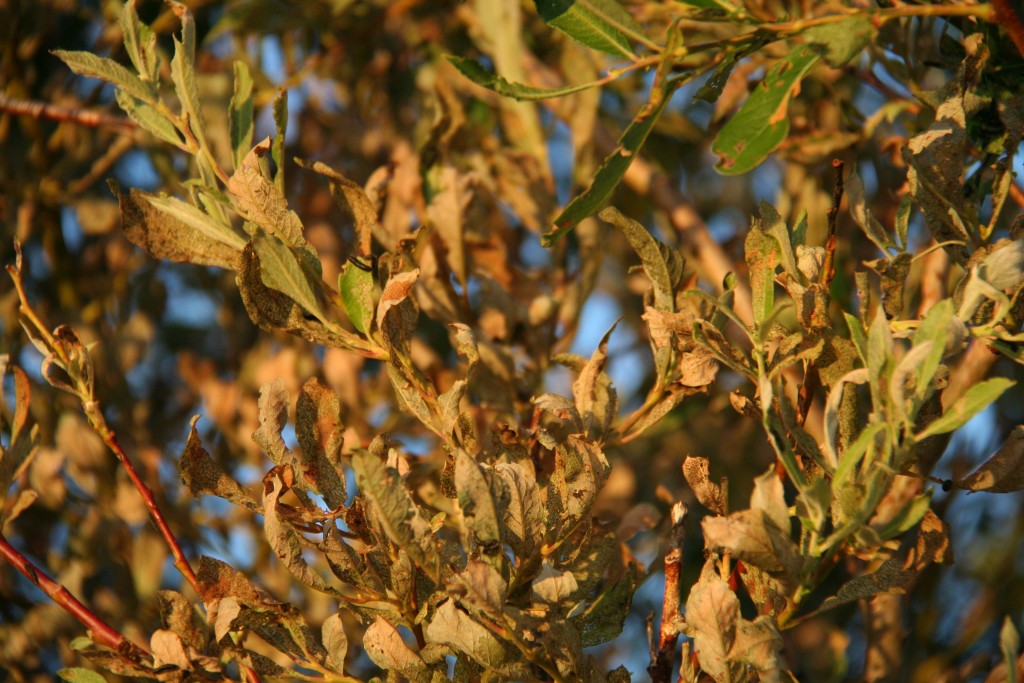 The sides of the road are sprayed heavily from around April to July, with followup spraying on many roads in the fall. This spring spraying coincides with vegetation green up and rapid growth as the snow comes off. As a section of road is free of snow and the road side vegetation begins its rapid spring growth, it is sprayed with herbicides. This is done incrementally in sections as the snow recedes up the mountain. Because of the differences in elevation this green up occurs as much as 2 months later at higher elevations.  This becomes a double edged sword for deer, as they follow the course of highway 39 up the mountain as the snow recedes as well, feeding on this same new growth as they go. By the time their fawns are born in Late May early June, they may have been feeding along this corridor for as much as a month. This pattern plays out across the West, as many roads and highways follow the same course as wildlife migration routes, for the very simple reason that it is just the easiest way to go somewhere geographically. This magnifies the time these animals are exposed to herbicides along these roads.

This picture shows some of the spraying along 39. Additional spot spraying is also conducted. 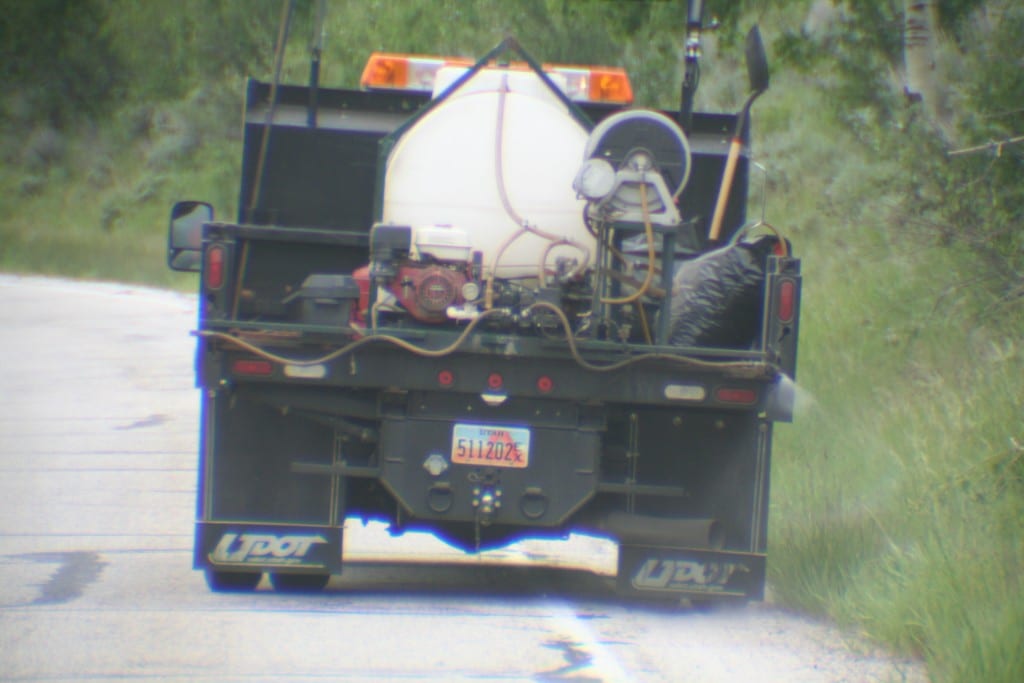 The picture below shows a freshly sprayed tree that has been fed on by deer and moose, you can see where they have clipped several branched from this young tree. 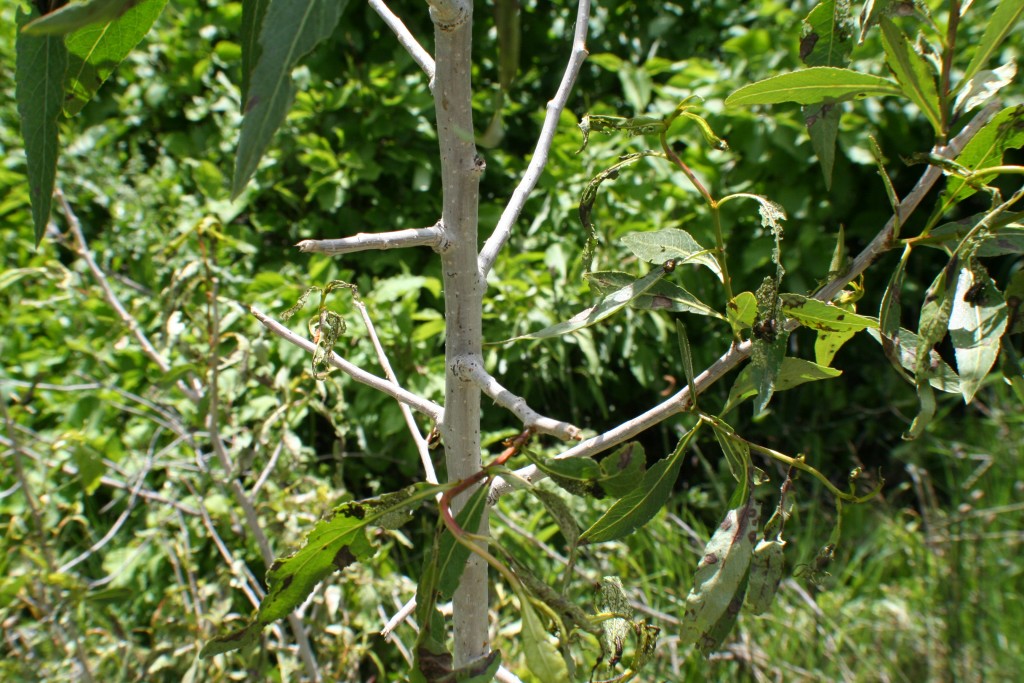 More of highway 39 that has been sprayed. You can see a power line that also gets treated with herbicides in the background. 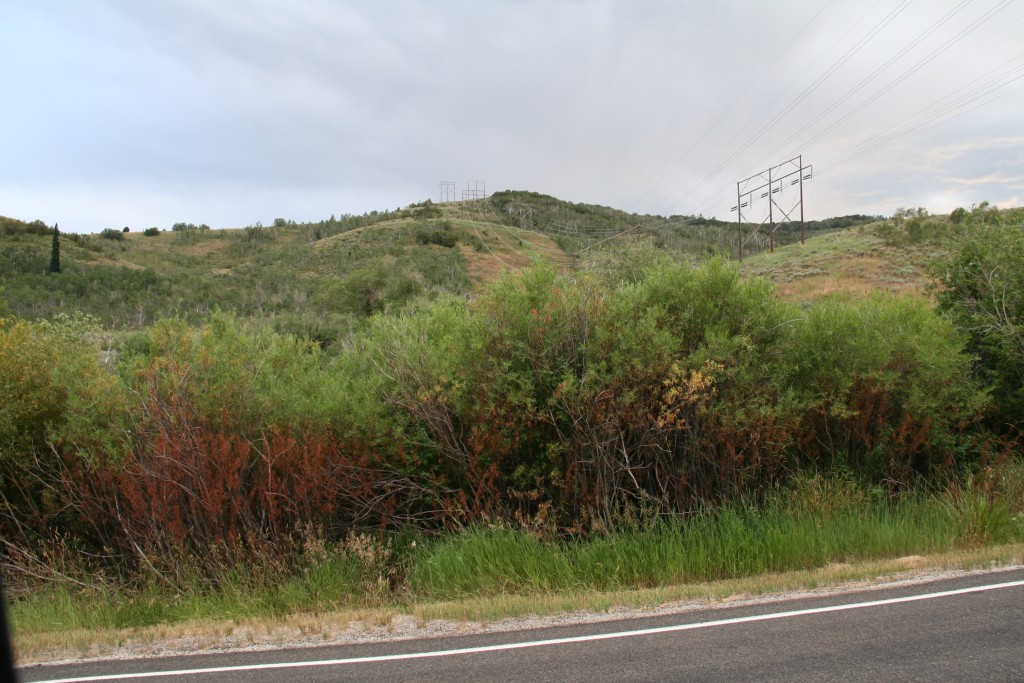 Elk with malformed antlers along side Highway 39. 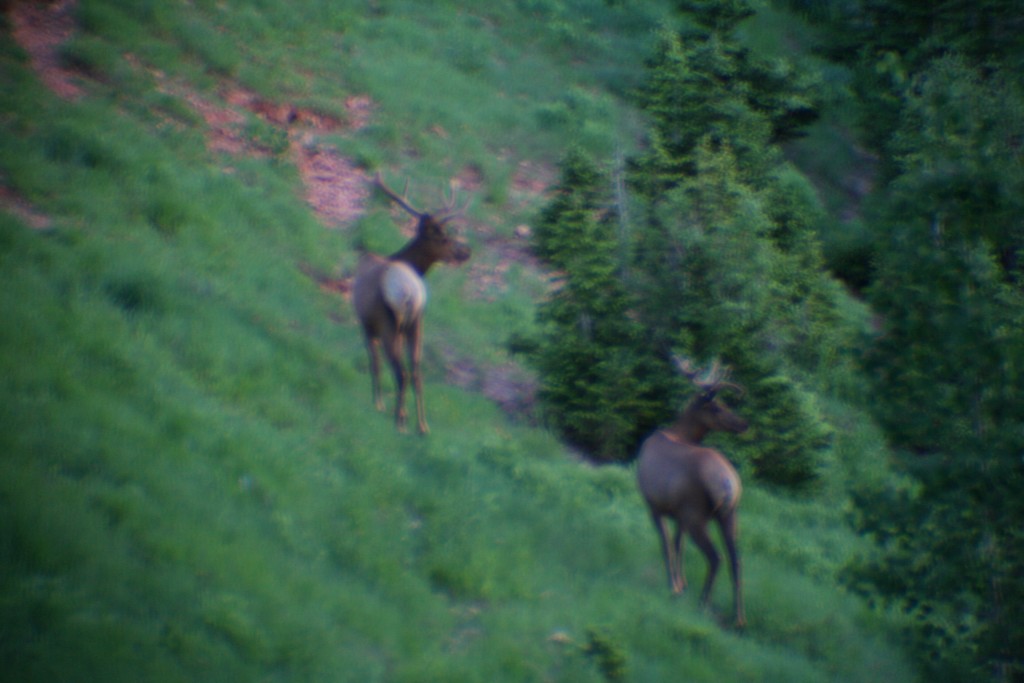 In this picture below we see the recently treated road side vegetation in focus, with the deer coming into the road side in the background. 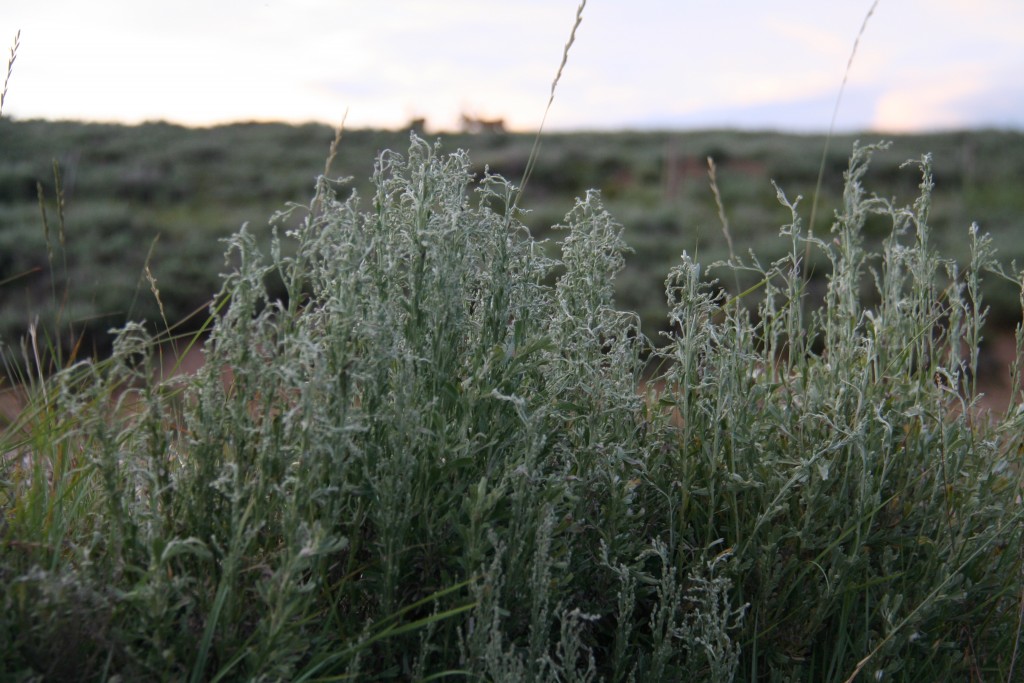 Below we see these deer in focus with the treated foliage in the foreground. 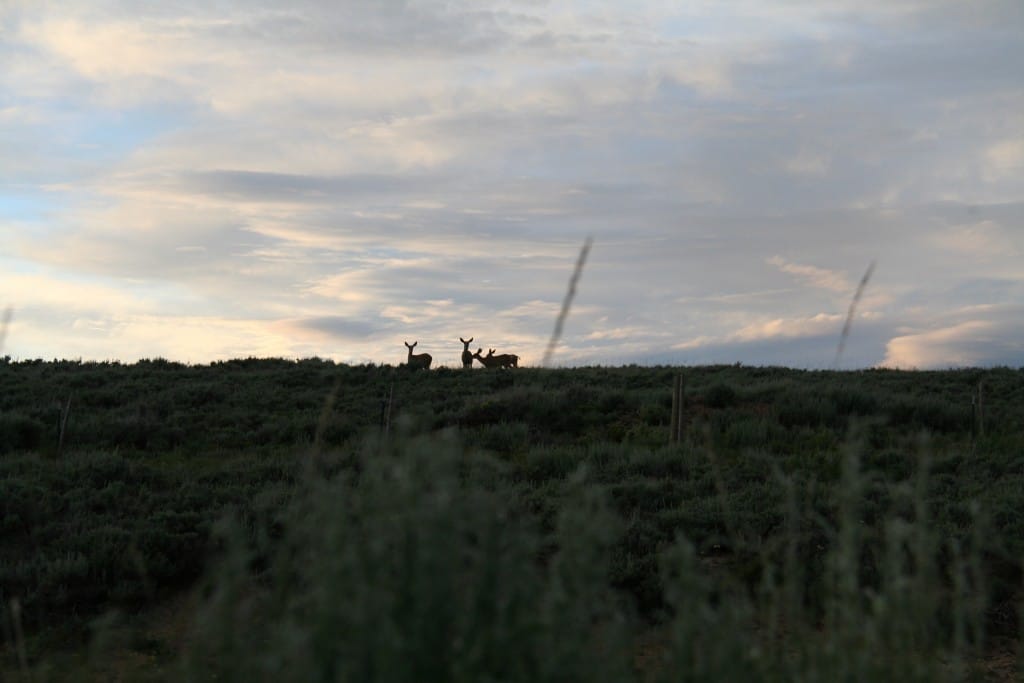 Sage grouse have also been seen coming into feed at some of these road side locations. The sage grouse below were coming into the same stretch of Highway 39 right after it was treated, as were elk, deer, antelope and rabbits. Sage grouse numbers are down by 50% over the last 10 years across the West. 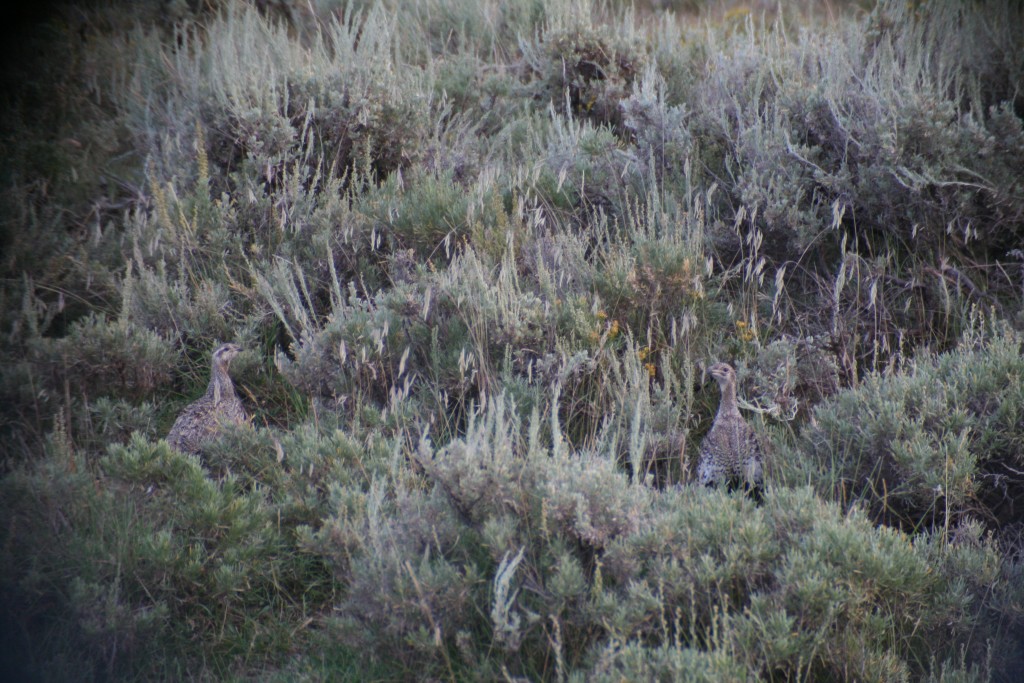 Sage grouse that has been hit by a car on Highway 39 along a treated section. 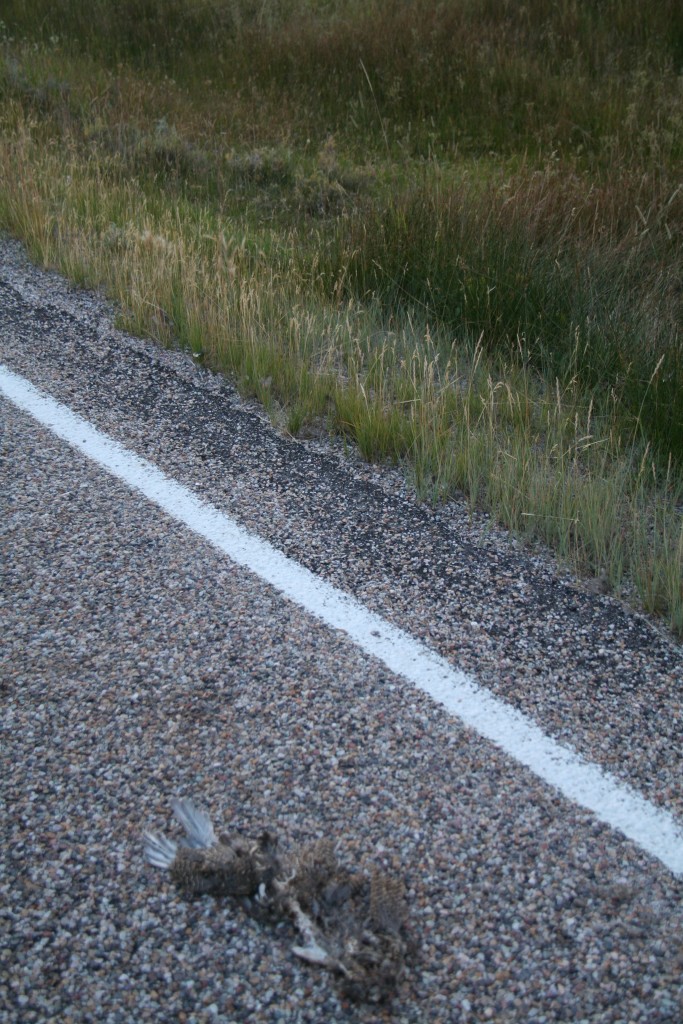 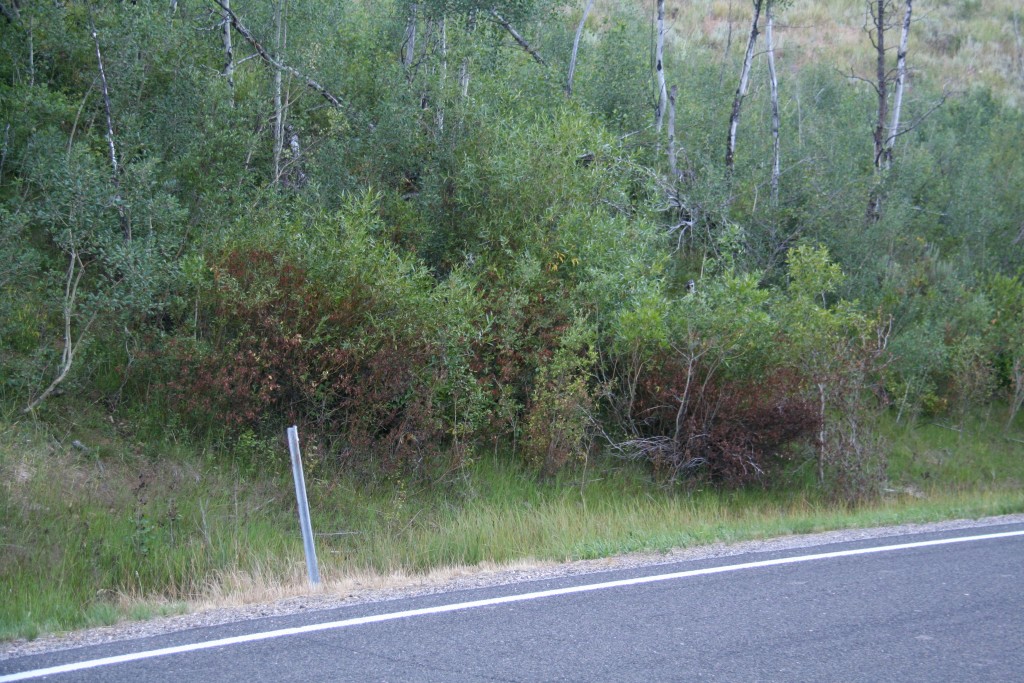