Many Yellowstone Deer, elk, antelope, and bison have exhibited varying malformations from under bites to malformed genitalia since the early 1990s. Some of these populations  have experienced declines in their long term populations as well. These malformations are seen in other populations as well. They have been documented in Utah, Montana, The National Bison Range, and Alaska, where they have been found in association with pesticide use over the last 20 years.

As in Utah, Montana, and Alaska, Yellowstone has a weed management plan that includes the use of several herbicides including glyphosate(1).  “These techniques are already in use in the park. Reinhart said workers have been treating invasive plants for the past four decades, but the program became more active 20 years ago.”(2)   Much of this is centered on road side weed management(1).
As many as half of the elk and most of the bison from Yellowstone migrate out of the park to their winter ranges. To the South the longest elk migration occurs with elk leaving the park for the National Elk Refuge and surrounding areas.  Herbicides are used on the elk refuge to control weeds as well.

Since 1994 weed control, including the use pesticides  in Yellowstone has been done cooperatively through The Federal Interagency Committee for the Management of Noxious and Exotic weeds (FICMNEW)

Much like we see in the Bitterroot of Montana, and along highway 39 in Utah, we see a very close association with herbicide application, and animals with malformations. In Yellowstone we see a high prevalence of bison with misaligned and malformed testicles. Below is a map showing pesticide applications in Yellowstone in 2012. The map below it shows the spatial densities of bison from January 1970-July 1997, along with “bison roads”. Much like we see with deer, elk, and moose along highway 39 in Utah, the densities and movements of bison also correspond to roads, as does  pesticide applications. 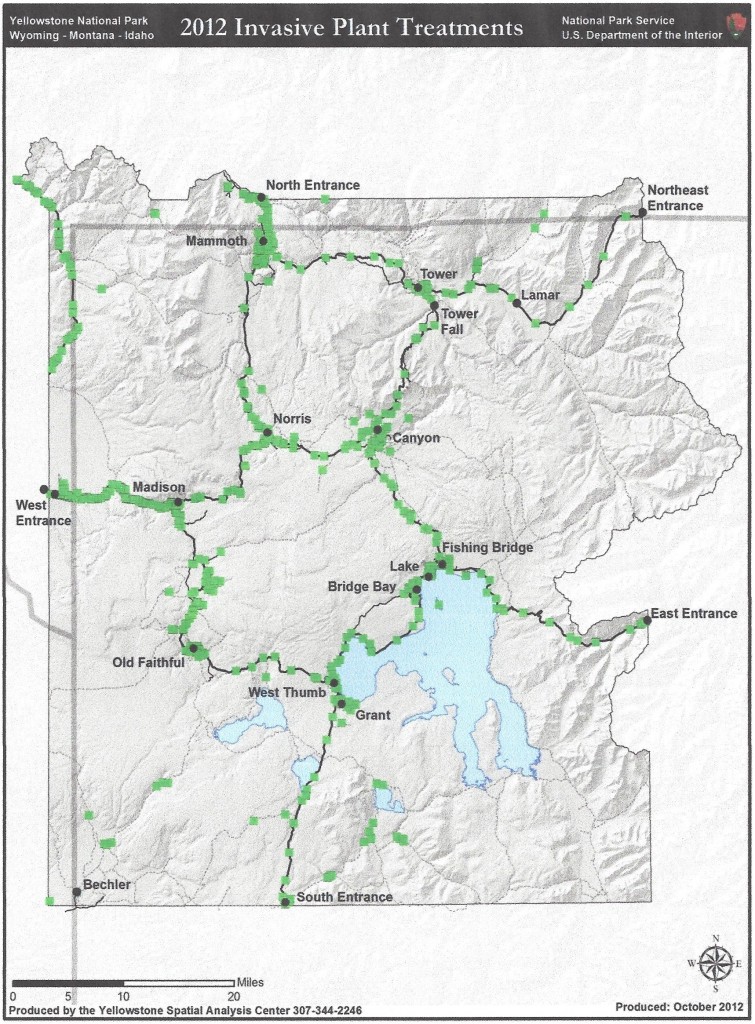 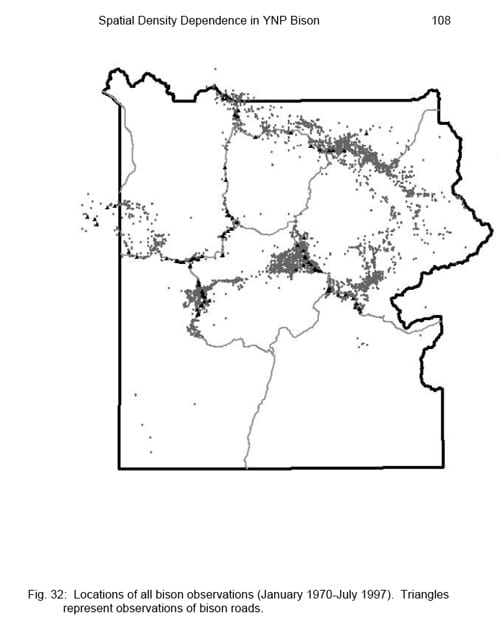 Some more context on the time frame of wildlife declines, malformations, and the use of pesticides: “Park staff began managing invasive plants in the late 1960s under the guidance of the park botanist, with assistance from park forestry crews. These early identification and control efforts were directed toward a few invasive species, involved limited staff, and were not supported with special funding. One of the first management programs began in 1968 with the attempted control of Dalmatian toadflax (Linaria dalmatica) in the Mammoth area. This early effort used various mechanical, chemical, and biological techniques“(1)

Coupled with stories like this one and the introduction to the 1976 “Mule Deer In The West Decline Symposium things start to come into focus:  “Mule deer numbers in the Western United States experienced a general decline in numbers from the early 1950’s until the present mid-1970’s. At least a part of this decline was a result of a planned reduction by game managers to adjust deer numbers to the carrying capacity of overused deer winter ranges. In addition to the planned reduction of deer numbers, it became apparent by 1970 that the reduction in number of deer on western ranges was the result of something beyond the planned reduction programs. The cause, or causes, for the reduction was not clearly understood or even defined in many cases. Such influences as predation, competition, weather, disease, habitat changes, and nutrition were suspected causes.  Perhaps the main cause of the decline has not been discussed and will need to wait for further research. This symposium was designed to help natural re-source managers become better informed about the reduction and the various reasons for the mule deer decline in the West. The speakers at this conference are considered to be authorities on the various aspects of mule deer populations.”(3)